“MOS Mexico: The most important graffiti event in the Americas” the Meeting of Styles Mexico website boldly states. Perhaps there is some truth to the statement insofar as the event attracts participants from across the globe, with representation from Western and Northern Europe, North America, Central America, and South America. But important for whom? The artists? Graffiti communities? Street art communities? The sponsors? The residents of the cities in which the events are held? The answers to these questions vary depending on the iteration of the festival and the claim about importance offers a clue to the shifting coordinates of the event since its founding in Mexico in the early 2000s: the organizers of this series of events are deliberately and carefully building a framework for festival production that straddles multiple spheres: the touristic, the community driven, the urban, the peri-urban, proximate to institutions of state power and at a distance. Inhabiting multiple and seemingly conflicting realms is something that graffiti is uniquely situated to accomplish, Kraidy has argued, claiming that graffiti’s function is heterotopic, always a little apart from but also deeply reflective of dominant cultural tendencies. In this piece I reflect on my experience at MOS Mexico in two of the three sites: Tlajomulco de Zuñiga, Jalisco, and Playa del Carmen, Quintana Roo, to map the various topoi that the festival travels, conceptually and materially. 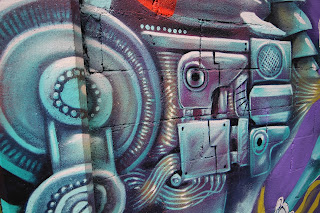 Near Franc Mun was Flaco from Cancun, who discussed the value of MOS for bringing people together, and for giving a “little taste of culture” to Playa del Carmen “where arts and culture is not accessible to many.”
MOS Mexico also emerges as a key site for evolving one’s style, particularly for writers from smaller cities or regions with less graffiti culture. Deas from Veracruz said in his hometown there are few opportunities for legal graffiti, so events like MOS are crucial sites for building contacts and developing new skills/getting “tips.”
The second day, in an abandoned lifeguard hut by a construction wall where some of the guys did some quick pieces on the beach, I interviewed Riot from Berlin, who also finds MOS to be a key site for building connections globally. His work is humorous, chaotic, and visually dense.
I also met Flit, from Yucatan, a 360 sponsored wall with prehispanic themes. For him, festivals in Merida played a key role in his artistic development.
Jace, from Aguascalientes but living in Playa del Carmen talked of the ways in which events like MOS provide “inspiration.”
Also visible at the festival are boutique graffiti economies. A group from Queretaro sold paint and pens out of the back of their car, another group sold t-shirt’s by their friend’s wall.
At Playa del Carmen, interaction with residents is minimal. Though some tourists would stop to take photos or even chat, or some of the local performers would provide commentary on the pieces as they changed into Aztec warrior costumes, the writers were able to paint with minimal distractions from humans. It was a much smaller group than in Jalisco, and most finished their pieces rapidly, perhaps because of the challenging weather (there was lots of rain), or because of the desire to turistearby the beach.
Looking at the two festivals provides a sense of the potential range of audiences and spaces that can be engaged by these events particularly due to the high level of organizational acumen brought by the planning team, but also some limitations that the structure provides (limited knowledge of place, exhaustion from travel, distraction from site). For me, it provided a wider panorama of the growth of legal graffiti practices across Mexico over the course of the past twenty years.