Meeting of Styles France, held July 18 to July 26, offered an immersive hip hop experience where spectators could enjoy displays of skill in graffiti, break dancing, and skating, as well as opportunities to learn about the history of the art form. Housed again at Casa Musicale, a cultural center that is surrounded by beautiful ruins, additions this year included Cinemos (a movie series), as well as Pause Culturale, a library collection of books related to graffiti, street art, and hip hop. I conducted interviews with Icat, Pinche, Vinie, Still Same, Kenya, Pyrate and Insect, Djalouz, Yome, Angelique Germain, Tretze, and Mezy, and expect to do some web-based interviews later this week. Transcripts will be available on this site later on.  I am deeply grateful for the organizers and the artists for allowing me to continue my research on the festival.

The festival doors opened on Saturday afternoon, but painting did not start until around 6pm, giving me some time to conduct interviews before painting began in earnest and writers were working against the clock, and the sun, to finish their pieces. I found a cluster of Spaniards, by language, and first talked with Icat, from Andalusia. Her name, she explained, comes from a conjunction of her given name, Mónica, and her love of cats, thus, Icat. The scene in Andalusia, she told me, is relatively small, and it is at festivals like MOS that one can build connections and learn new styles. Her style is more of a wildstyle, with exaggerated and bending letters. I then met Pinche, who hails from Madrid. His piece ended up being a quasi-realist reference to the festival theme, “Mind over matter,” with a portrait of a man, half of the face flesh, and half bone, and the words, “mind/matter” written in ink pen. The scene in Madrid, Pinche noted, was “very harsh” and the city “very grey” with a great deal of buffing and tough police response. 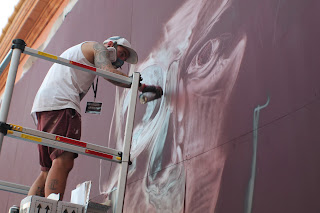 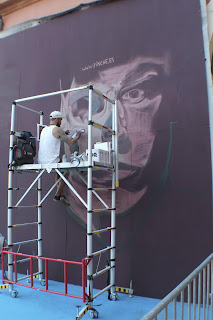 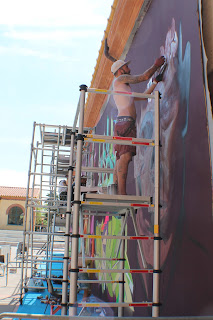 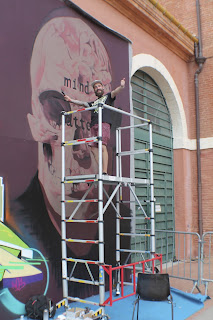 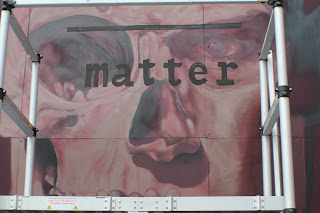 Soon after, I met Vinie, whose work I have followed since 2012. Her work is iconic, with the figure of a girl, with hair composed of paint flicks, ribbons of letters, or natural surroundings. It is marked by a high level of polish, something that is more visible when seeing her in process, and seeing the nearly infinite layers of paint that she even blends with the slap of a cloth. She remarked on her time in Toulouse being formative for her style.

I then say hello to Still Same, a writer from Wiesbaden who helps Manuel organize the festival there. His work is usually character based, monsters that are fearful, but often with a surprising and “cute” element: this year it was a sharp-toothed shark in a baseball cap and a potbelly, in a fishing boat. We discussed, among other things, his use of an English, rather than a German name. He exclaimed that MOS France was his favorite of the MOS festivals, for the energy, the beauty of the location, the high level of organization, such that his fatigue and frustration after a 21-hour bus ride with screaming children started to fade away.

Already early in the festival there was a large audience, spectators that included families, children, dogs, as well as hip hop lovers. The food truck area of the festival was also more developed this year, with six different trucks, adding to the overall sense of festivity. There I found Gerso, the organizer for the MOS Mexico friends, who I met back in 2011 at MOS Mexico in Ciudad Neza. Gerso was given a spot on the front wall, next to Tretze.

I met Kenya, a Parisian writer, who has a kind of old school style, with flat, two dimensional but very wild letters, complemented by cartoon figures.

At about 4:00 pm the artists were called into the cultural center to do initial planning for the wall. In this sense, the projects were very improvised. Some had clear ideas of compositions and characters, but others waited to see who they were situated by, what colors they were given, and so forth. They took a group photo, and then went into a back stage area. I waited in the cultural area, watching children draw or read, and the occasional person plunk on the nearby piano.

Soon after the DJ called everyone to the main stage for a roll call. Each artist was called by name, and given their cadeau (gift), a pack of paint of about eight cans per person. In this way, audience and artists could assign names to faces, and publicly recognize and celebrate their fellows, the DJ urging cheers and clapping for each.

The artists soon get to work, and I return to my wandering circuit from walls to center to walls. I meet a Marc Beton, a lover and follower of the graffiti scene, who lamented the increasing commercialization of the scene. I then interviewed Pyrate and Insect, from Nîme, who did a complex character driven piece. Insect, in particular, is interested in abandoned or destroyed spaces. Soon after, I talked with Djalouz, a play on the word Jalouse (jealousy), which refers to the content and sometimes the affect that infuse the graffiti scene: resentments, jealousies, meannesses.

At 8pm there is a screening of a short film by Angelique Germain, president of Hip Hop Open, and titled “Universal State of Mind,” which explores hip hop culture in Senegal, Serbia, Paris, and Brazil. The scenes range from “activist” or “aesthetically effervescent” she noted in a short Q&A that followed the film. Immediately after we saw the Tour 13 documentary by Thomas Lallier, which covered a temporary project that took place in the 13ème arrondissement in Paris during October 2013.

Shortly before the tagging competition, “What’s my Name,” I had the opportunity to speak with Yome, an old school bomber from Paris, who talked about the importance of the St. Lazare station and the 19th arrondissement in the history of graffiti culture in Paris, namely because it was a dense and competitive space. He also reflected on the “bipolarity” of the Paris government’s treatment of graffiti, that there is the very powerful Vandal Squad, on the one hand, and a thriving gallery scene, on the other. Moreover, there are different treatments of street art and graffiti, even if both are illegal. “They want to put a Lion in the zoo,” he lamented, reflecting that many of the writers at MOS are not real bombers, some not having any experience in the illegal scene. Yet, he admitted, the festival served an important educational role, “most of the French in the south west don’t really understand graffiti” and so the graffiti festival is one venue for enlightenment. He expressed optimism about graffiti’s social effect, that it is a more positive outlet than many, and that he knows “many people who have been saved by graffiti.”


At 9pm the “What’s my name?” competition began, a tagging competition adjudicated by three experienced writers, where the competitors are given a three letter name to write, two cans of different colors, and seven minutes to write it, after which the judges decide which is the best. This competition offers a simulation of the pressures of illegal tagging, and demonstrates to the audience the level of skill, in terms of speed and technical capacity under pressure, needed to do even illegal work. One can see this education at work as spectators around me, ranging from little children to tourists would verbalize their opinions about the work: they are learning to be readers and critics of graffiti, and one can also observe their rapt attention. It is also a performance of expertism: the competitors are very experienced, and most hold themselves with the quiet confidence that, across genres, is evidence of feeling at home in a field. 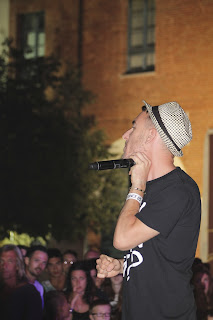 Though the party would continue until 2am, including a hip hop dance party.
Sunday was more relaxed in the afternoon, after likely many hours of partying. At 1pm there were few spectators, mostly the artists working slowly and carefully in the unrelenting sun. It was over 90 degrees fahrenheit and over 50% humidity. In the shady corridor where Kenya, Revs, Pablo, Berns, and others were painting I took refuge, and Kenya talked a bit about his process, how he does not like to paint everything at once, but rather, take his time to keep perspective. I noticed an older man, perhaps in his sixties, wearing a white shirt and khaki pants standing near me, holding an enlarged wooden crucifix as well as a carved cane. He engaged one of the writers in polite conversation about Jesus Christ. Soon after, a truck with municipal plates drove into the center area, and with high pressure wash and chemical spray, buffed some tags that had been painted on the brick ground.
I ran into Angelique (Angie), and had a chance to interview her. She mentioned an “almost brotherly state of spirit” that energized the festival, something that might not be as politically engaged as some other sites of hip hop she has observed where citizenship (citoyenité) is a driving concern. MOS, she reflected, is more about fun (s’amuser), enjoyment. I persisted in asking about the state of hip hop culture in France. She replied, thoughtfully, that France is on a more commercial path, as it is a capitalist country, though, of course, such commercialism does not hold for every cultural producer. In Serbia, and in Senegal, hip hope, she had observed, was less about monetary renumeration and more about the translation of negative experiences into art, or, in Latin America, about consciousness raising (conscientizar).
I found Kems, from Bordeaux, who has a kind of box-like wild style flair. His letters are angular  in a big rectangular field with chunky letters. He noted that he was stylistically influenced by comics. I then talked with Tretze, from Barcelona, before he returned home. His piece was a two-story wolf, with jaws drooling. I persisted in asking about if his work had a particular message, and he replied no, that the wolf was, indeed, just a wolf.
Later in the evening I find Mezy, and the number of spectators has continued to swell. He discusses his movement between two dimensional and three dimensional styles, as well as the slowly changing perceptions (improving) of graffiti in France. 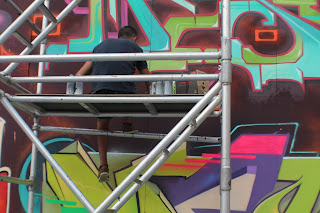 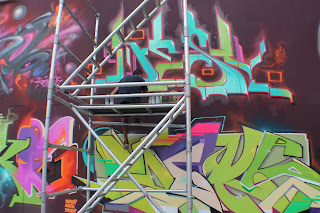 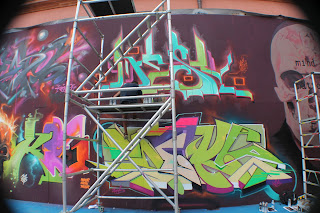 Indeed, Angie’s insight about MOS France being more about enjoyment than politics rang true to me. The majority of artists emphasized the festival’s purpose being about meeting up, hanging out, making new connections and viewing new styles.
At 9pm the dance battle begins, and this question of esprit fraternelle again was raised in the performance of the dancers, who went on in teams of three, but also the collective dances that the DJ invited, moments of intense conviviality that might not be polemical but also subtly shift the harsh boundaries between different groups. An old school break dancer, Funky Legs, served as judge, sitting in a lifeguard chair in front of the stage. Such conviviality continues in stories about previous festivals: FPLO, from Porte Allegre, Brasil, recounted tales of a road trip across the U.S. with himself, an Italian, and a German. 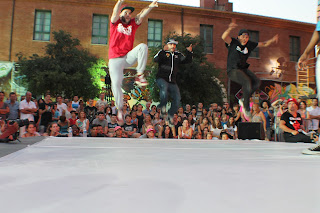 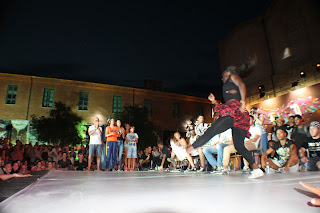 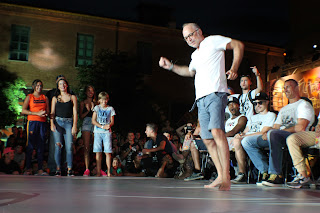 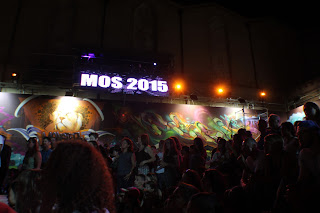 The next day, the official vernissage or art-opening yielded the mainly finished pieces. A Harley Davidson club had brought gleaming motorcycles, and they were positioned in front of various pieces, creating points of similarity and contrast. The tireless organizers were still there, though some no longer sporting MOS shirts. Many of the artists had departed, and the food truck area, amateur wall, and cultural center were fenced off. The space had more of a sensation of a collection than a live performance. Yet, the gleaming pieces, a range of lettering, realistic and fantastical figures, testified to the labor and diverse assemblage of bodies present at the site, yet another encounter between and among styles.
**thank you again to the organizers and the artists. felicidades/felicitation/congratulations! 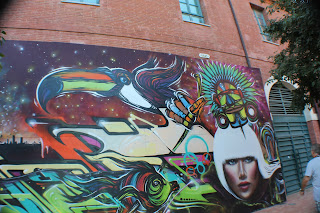 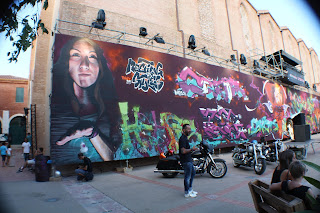 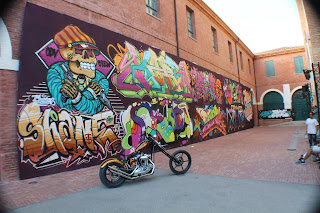